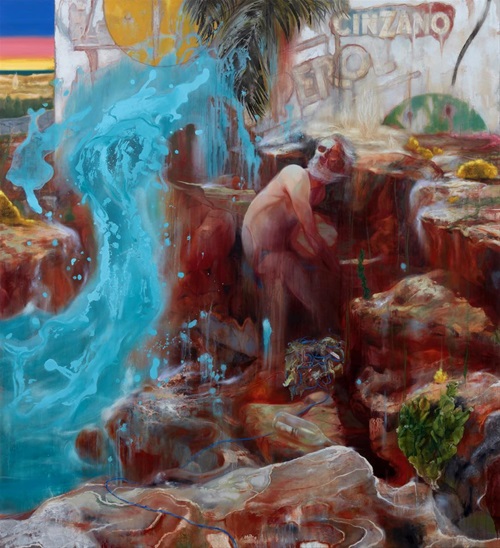 Cooke’s paintings, frequently on monumental canvases measuring up to 6’ by 12’, feature somewhat dystopian landscapes, peopled by a variety of oddball and yet recognisable characters. Each painting demands close inspection as, among the weeds, stones and rubble we discover graffiti-like slogans, motifs and painterly references to his artistic heroes, such as Francis Bacon, Velazquez and Goya. Cooke likes to work at close range and at a distance, so it often seems like each painting contains many smaller ones within it.

The Jerwood Gallery show is something of a homecoming for Cooke – who mixes music, the weather and memories of growing up in Manchester to create his work – as Hastings is where he first had his paintings shown as a professional artist.

Cooke says: “Coming back to Hastings after many adventures – in painting and the art world in general – to mount a show, has the feel of an odyssey. That’s the thing about painting; no matter how far you think you travel, you always end up back at the beginning.”

He adds: “A lot of my work has the shoreline as its location and, because Jerwood Gallery is by the sea, I wanted to focus on this aspect. Like all of us straining to get to the beach when the sun is out, I like to set my paintings at a similar frontier, an idealistic background that the painting can react to.”

In his exhibition Painter’s Beach Club at Jerwood Gallery, Hastings, Cooke will be showing works previously unseen in a public gallery in the UK that the New York Times described as combining ‘Magic Realist illusion, post-apocalyptic fantasy and extreme shifts of scale’.