Ahead of the opening of his exhibition at Galerie Antoine Laurentin in Paris, painter Sandro Kopp talked to me about his technique, inspiration and icons.

Presence is a central theme in Sandro’s œuvre and as his frequent model, tattoo-artist Carolin Ackermann, highlights in the catalogue-text for the upcoming show “Sandro’s investigation of the portrait is relevant to our time, as he seeks to understand the experience of the present and of presence, the metaphysical question of what is.”  His paintings definitely reflect “l’air du temps” as they merge traditional painting with an innovative approach to visual language: sitters are portrayed via Skype video chat.

Sandro’s intelligence, grace and humility pervaded when talking to him, and our discussion, on a very grey Saturday afternoon in London, was very inspiring.

Where are you now and where’s your studio?
I am in the Highlands, in Scotland.

Do you sometimes paint somewhere outside Scotland?
I started the “Caro and Cy” series in Prague. If I stay in one place for more than a week, yes, I take my materials with me.  And then I leave a trail of paintings around the world. Often canvases don’t dry on time so I am forced leave them wherever I paint them… (laughs).

How did the Paris exhibition come about?
Antoine Laurentin liked my paintings and offered a show.  We were introduced by our mutual friend, the sculptor John Martini.  The gallery space is lovely. It’s on the Quai Voltaire across the Pont Neuf opposite the Louvre.

Tell me about your paintings, do you start with a sketch?
The paintings are usually done via Skype conversations in a single sitting over the course of three or four hours.  The “Modification” series is the heart-piece of this exhibition. It consists of twelve pictures of my two friends Caro and Cy and was made over the course of about 18 months. They are an extraordinary couple who work and tattoo together and are often completely nomadic. I’ve known Carolin for a long time, since she was a teenager. She was doing a social theory degree in Barcelona writing about body modification. Over the course of her studies, she would alter the colour and cut of her hair every month or so and I would then do another painting of them both via Skype. She started with long, natural-colour hair and ended clean shaven by way of every colour of the rainbow and lots of interesting cuts. Cy, on the right in the paintings, stays the same externally, but my interpretations, my “subjective filter” unwittingly makes them both something new with every new painting: each painting becomes an analogue to the reality of what the sitters looked like objectively, hence a hybrid of my perception and their appearance.

Are you inspired by your models and do you paint more male or females?
I always have long conversations with my sitters, and in a way the paintings are the “by-products” of these conversations. I only paint people I know; they are friends of mine most of the time. It’s rare to paint someone I don´t know. It doesn’t matter whether they are male or female – as long as they are people I find inspiring.

Having said that, I think for the recent portrait shows there was dominance of male models and in my upcoming exhibition in Paris, there are a lot of really strong women for some reason (portraits of Saskia de Brauw, Casey Legler, Peaches Nisker, and Natasha Khan are, for example, featured in the exhibition).

Have you had any complaints from models?
No, not really, though I am sometimes not happy with the painting myself (laughs).

Would you ever use photographs of the models instead of live Skype conversations?
I very deliberately don’t paint from photographs of people. Skype presents a whole field of interesting experiences which are important to what I’m doing. The pixelation and distortion sometimes become part of the painting. Depending on the connection, it can be difficult to see a lot of details and that provides a sort of visual shorthand that allows me to work very quickly and directly. I am not saying I will never use photographs, but I concentrate a lot more on the moment when I paint my sitters virtually, knowing that they will no longer be available after the sitting is done. The precariousness of the present moment is a very focusing thing that makes me operate more instinctively.

Would you experiment another medium?
I have used video components in the past for a show at Lehmann Maupin a couple of years ago.  I had monitors showing raw footage recorded during the Skype painting sessions and an edited clip projected on the wall, surrounded by the finished resulting paintings. But – at the end of the day – painting is what I am most interested in. Here is an excerpt:

Sandro shows me some of the large portrait drawings he’s working on and brings my attention to the toys located behind him on shelves. What are they for?
These cuddly toys are being used for my transitional objects series “Fiercely Loved” which I exhibited last autumn in London. Friends lend me their precious old cuddly toys and I painted them as placeholders, like an ambassador of the person’s presence. The idea was a direct continuation of the Skype project: looking at the mediation of a person’s presence. In the Skype series this mediation takes place through the likeness of the person presented via video chats. For “Fiercely Loved”, people’s presence is mediated through an object that they have kept so close and often anthropomorphised so much that they have “imprinted” a “gleanable” element of their presence on it.

Who do you admire the most?
There are a lot of people who I really get huge kick-out off: Chuck Close, Alice Neel, Taryn Simon… David Hockney is a great painter and, perhaps, an even greater thinker. I think he’s a real master. Lucian Freud is obviously a huge inspiration. Isaac Julien’s piece “Playtime” was amazing. Celia Hempton is a painter I recently discovered and find very interesting; her recent series was mainly colourful images of people’s genitals. She is young and just had a show in Rome. I admire the energy in the work.

Do you think painting is still a current medium or a little bit passé?
I think that the whole notion of painting being passé – that other media have supremacy – has been disproved of since the early 90s. Nowadays anyone can do anything. If it happens to take the form of painting, then that’s fine, if it’s a cube filled with steam for instance, then that’s fine as well. You need your own personal touch. It’s apparent that nowadays, the actual form that you take is secondary.

Another artist I love is Peter Doig, he’s a real example of someone who goes his own way through paint. I saw the big show in Edinburgh, and thought it was completely fresh. Every piece was different from the one next to it and created a universe of it’s own, yet at the same time each was completely cohesive with his sensibility.

Are there any people you’d like to paint?
I used to have lists of people I wanted to paint, but not any more. I got to paint Marilyn Manson for instance. He was on my “bucket list”. He did a painting of me, and I did a painting of him. In recent years however, the “who” has become less of a focus for me, the resulting painting is much more important for me now than who it is of.

I used to be fan of Marilyn Manson but then lost track after Mechanical Animals. Do you still listen to his music?
Born Villain is a very fun album. Manson is a great guy and I like a lot of his art. I like his “joie de vivre”. He’s a very playful person. He’s known for music but is also doing painting, writing, acting, directing etc. He is a good example of someone who goes into different territories creatively. That’s what you have to do: make things that feel relevant to you. I remember a lovely quote from Patti Smith giving advice to the young, who said “A writer or any artist can’t expect to be embraced by the people. I’ve done records where it seemed that no one listened to them and then you write poetry books that maybe fifty people read,  and you just keep doing your work, because you have to, because it’s your calling…”

I think it’s dangerous to interpret your work too much. It will find resonance in someone else who will appreciate it, like with you, the fact that you were gracious enough to invite me to talk. It means that I’ve done something which in some ways is relevant to your sensibility and it’s nice to share that.

You know I lived in Arles and I am very inspired by Van Gogh. There’s a new installation in London at 87 Hackford Road in Brixton, a house he lived in for a year, invested by the contemporary artist Olde Wolbers. It’s organised by Artangel, have you seen it?
A propos this, I am currently reading The Yellow House, by Martin Gayford. The book explores the relationship between Van Gogh and Gauguin in the few weeks before their big row. I was struck by how destitute and struggling he was and yet so productive. I admire his balls, his ego and the conviction he had in the relevance of his work.

Do you prefer Van Gogh or Gauguin?
Definitely Van Gogh.

What are your future projects?
I’ve got a number of these repetitive bodies of works coming along or completed: the nudes and a self-portrait series. I painted myself every day for twenty-eight days, and hung them as a block. I did one five years ago and just did another one now. I am really happy with it. I also am working on more paintings of the “Fiercely Loved” transitional objects.

After Paris, I am working on another show in Istanbul with Istanbul’74 in the autumn… 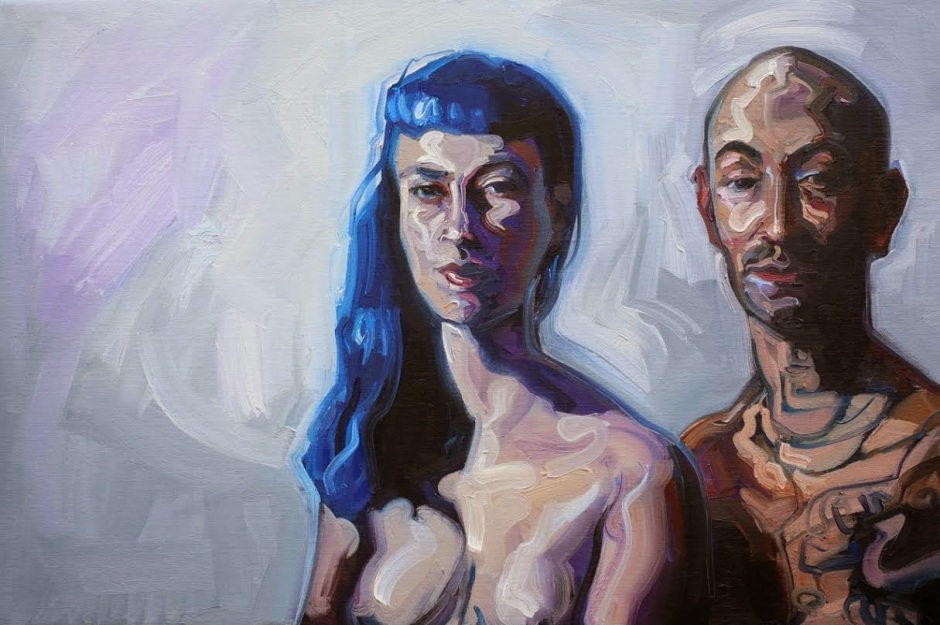