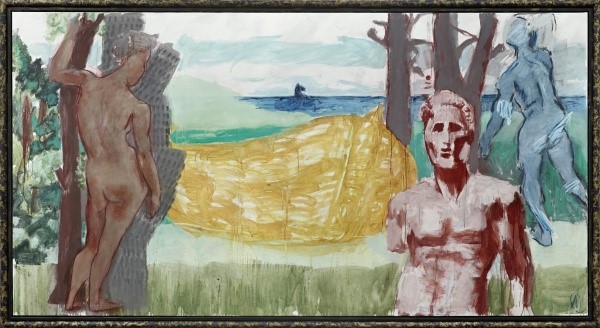 German painter Markus Lüpertz is the subject of an exhibition at Almine Rech in Paris, opening later this week and running until 24th November. The exhibition features sculptures and paintings by the Neo-expressionist artist produced between 2008 and 2018.

Heavily inspired by cinema in both the form and content, Lüpertz establishes strong parallels between moving images and his own paintings. “Cinema was always painting an image several times simultaneously. One painting leads to the next.” Like a film, Lüpertz works can be isolated frame by frame and develop intricate narratives.

Central themes to his oeuvre include interpretive environments, classical poses in natural settings and consideration on Western Culture. “In works of a similar spirit, Lüpertz might include a turtle, a serpent, an officer’s cap, a snail, a bird’s wing, or even a rowboat (as in Palette (Arcadien) Gold, 2018). The rowboat itself evokes the theme of Arcadian paradise, which links Lüpertz’s art to German predecessors of the nineteenth century, such as Hans von Marées, as well as to artists of the Renaissance and Baroque. His pastoral settings derive from his experience of the watery land around Märkisch Wilmersdorf, outside Berlin, where he maintains a studio. The Märkisch landscape, the artist’s present environment, links his pictorial fantasies of the past to his everyday existence.” Richard Shiff said about some of the highlights on view in the exhibition.