Fornasetti is more than a legendary brand, it’s an invitation to dream. On the occasion of Citazioni pratiche a stunning exhibition presented at Palazzo Altemps, Rome, until 6 May 2018, Art is Alive caught up with Barnaba Fornasetti – son of the brand’s founder Piero – to talk about Lina Cavalieri, the curation of the show, the collaboration with Rei Kawakubo (Comme des Garçons), and his father’s work with artists such as Lucio Fontana and Giorgio de Chirico. He reveals intimate moments with his father and eloquently talks about the legacy of Fornasetti‘s poetic visual language.

How do you maintain the heritage and legacy of the brand?

It’s always been easy for me to keep the creative vision of my father alive, respecting his style, his rigour as well as the elegant, subtle sense of humour of Fornasetti. I was born in this context and my imagination has been forged by it. The main lesson I inherited, and that I maintain, is about not being obsessed by contemporary trends. At the same time, I perpetuate and renew the workshop tradition, reviving the most popular pieces and creating new ones.

How many new products are developed each year?

There is no rule. As for the re-edition of iconic objects, we consider one piece a year. That’s different when I create something by elaborating old décors and experimenting new shapes and techniques. I don’t like the concept of “collection” and I do not want to undergo production schedules. I can not stand the overproduction linked to consumerism and to the idea of endless growth which is not ethic.

The sources of inspiration are varied, and they come from the past, quite often from classic and neoclassical art, always respecting canons of beauty.

The themes created by Fornasetti are part of popular imagination that lies in our collective consciousness. These images have always been stocked in our mind and memories. Fornasetti takes inspiration from them and reshapes them in order to create a whimsical world, full of images and colours, crossed by a witty imagination. Since the beginning, Fornasetti has come up with a truly unique visual language, easily recognisable and always fascinating.

Why is Lina Cavalieri such an important figure?

Lina Cavalieri was an internationally renowned artist who lived at the turn of the 19th and 20th centuries. Piero Fornasetti – my father – never met her but the graphic, formal appeal of her face was the original spark for his creativity. Over the years, her golden proportions and enigmatic expression would go on to inspire almost 400 variations. As my father explained, Lina’s face is a true archetype. The quintessential image of classical beauty. Like a Greek statue, she is as enigmatic as the Mona Lisa. A face that could constantly be remoulded as visual intuitions surfaced in his mind. 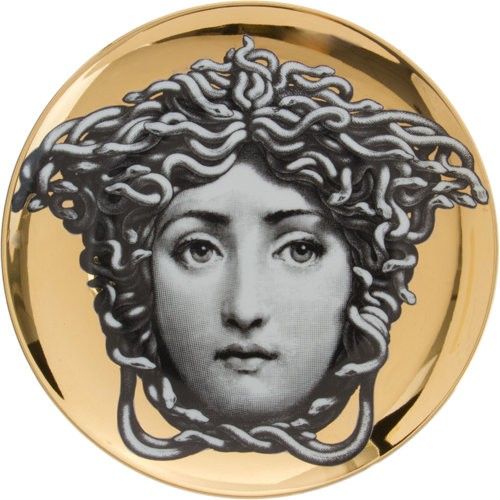 Tell us more about the exhibition at Palazzo Altemps: how did it come about, what’s your favourite room and how did you select the artworks in the exhibition? Who is the curator?

Bringing the fantasies and creations of my father and myself at Palazzo Altemps, not only presenting them to the gaze of contemporary visitors, but also of these great classical works, we felt it was necessary to maintain a respectful distance. We built a dialogue in which memory becomes a way of reflecting on the present and imagining the future.

The path of the exhibition is an experience that is contemplative by nature: it is an invitation to ramble freely and reflect, leaving interpretation to the visitor and their own imagination. It follows a selection of quotes, some curated by Ginevra Quadrio Curzio, others by Fornasetti himself.

The idea of the exhibition was born from shared considerations with Valeria Manzi, a collaborator, director and muse for cultural projects we work on. Silvana Annichiarico, director of the Triennale Design Museum, and Alessandra Capodiferro, director of Palazzo Altemps gave the green light to our ideas while at the same time matching the museum’s needs. 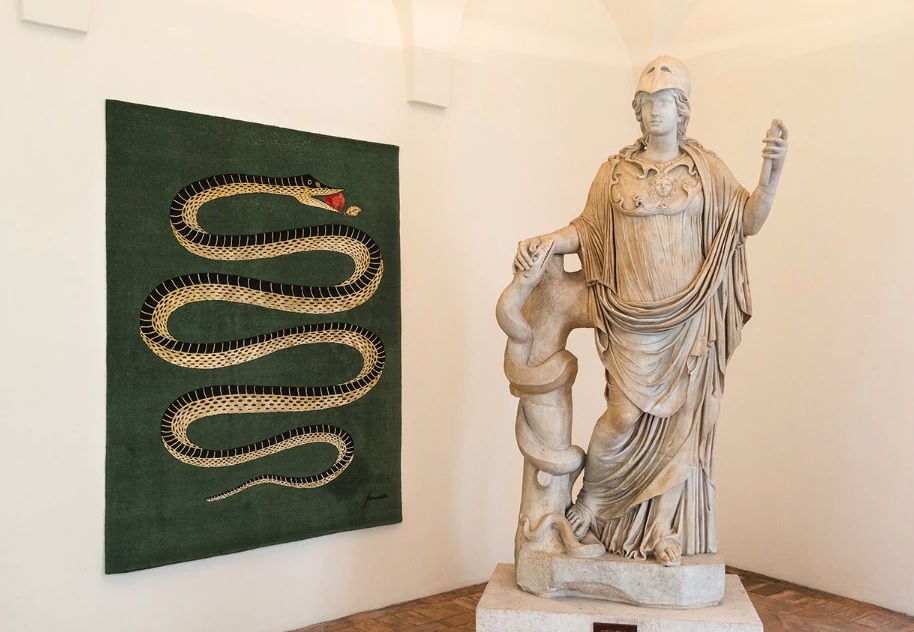 Tell us something we don’t know about Fornasetti: a story with your dad, a fantastic collection etc.?

When I was three years old, I brought a leaf of hydrangea from our garden to my father and I put a daisy flower on it as a present. My father made a tray with that décor, the leaf and the flower, and put it in production. That was our first collaboration.

Who has the most amazing and largest collection of Fornasetti objects in the world and where is it?

The most complete collection is in our archive, which contains several thousand artworks. Just to give you an idea, the exhibition at Palazzo Altemps features more than eight hundred pieces.

Almost all Fornasetti’s objects are a little bit bizarre. The oddest one is the Fender Stratocaster guitar, currently displayed in the exhibition. It is placed besides a warrior statue without fingers, as if the character had lost them playing too much of that guitar. 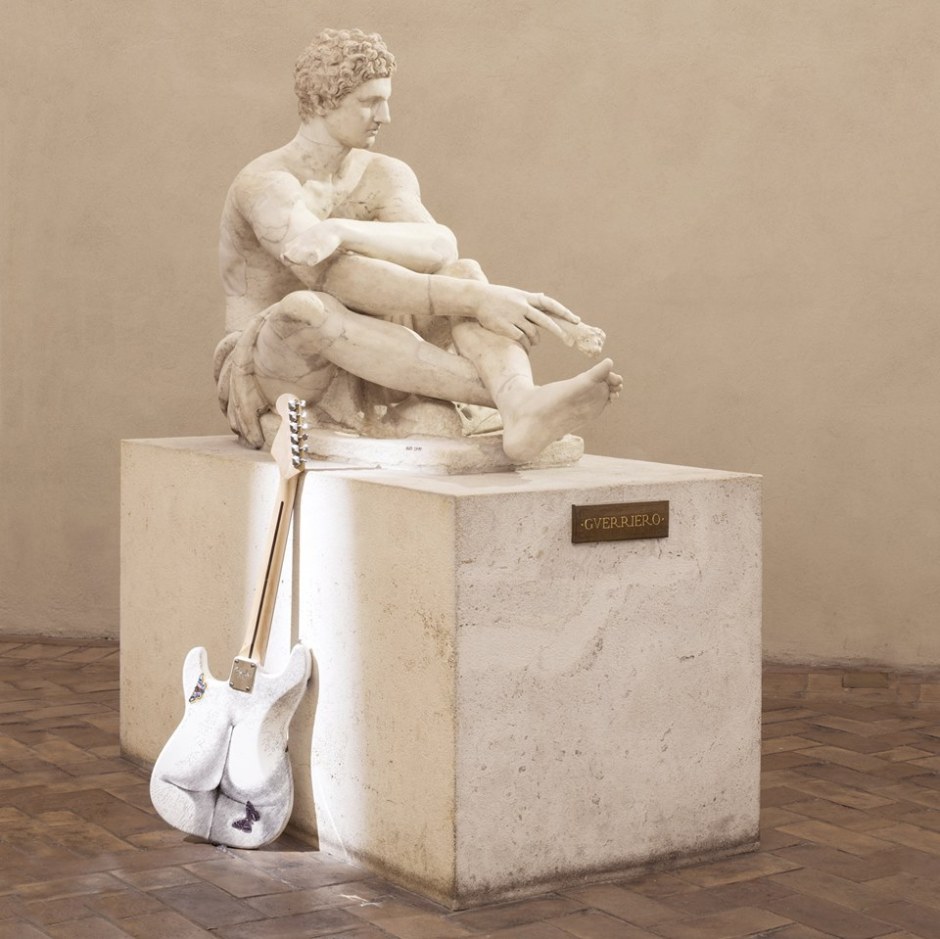 Any celebrities fan of the brand?

Many. I never reveal their identities out of respect for their privacy.

The project you’re most proud of ever?

Everything I have worked on, always with pride. My enthusiasm is usually focused on what I am doing now, whether a physical object or a concept.

At the moment the Palazzo Altemps exhibition which worried me a lot in its design phase, is giving me a lot of satisfaction.

Would you ever collaborate with a contemporary artist or fashion designer today and who would it be?

I have recently collaborated with a fashion designer and artist: Rei Kawakubo. I like the “fashion-not-fashion” concept, what she pursues with Comme des Garçons.

In fact, it is the only Fashion Maison to which I granted the usage of some décors for a collection – except a short break in the nineties for a collaboration with Lawrence Steele. Actually, the most touching collaboration with a team of artists occurred on the occasion of the production of Mozart’s Opera “Il Dissoluto Punito Ossia Il Don Giovanni” by Fornasetti. It was presented at the end of 2016. I had the extraordinary chance to work with Romeo Gigli on the costume design and Simone Toni on the music.

Who do you collect in terms of modern and contemporary art?

I am not a collector, but I love art. Anish Kapoor, William Kentridge and many others; but, above all, I love artists who protest, such as the graffiti artist Blu. He removed his graffiti from the walls of Bologna. I think it is an important and emblematic message for the future.

Tell us more about working with de Chirico and Fontana, how was it and where are the artworks today?

My father was a professional printer for some of the most important Italian artists (De Chirico, Fontana, Sassu, among many others). Gio Ponti also used his expertise and his special innovative technique to apply designs to different mundane everyday objects.

At that time – when my father met them – I was very young. Today, I don’t have a lot of memories about this period in time, but I have many printing proofs.

What is your dream project?

A dream: a Fornasetti museum in Milan. I would also like to develop projects that would be less constrained by physical products. I’d love to create installations for public spaces. I would also love to work again on the facades of public buildings.

What are the plans for the brand in the future: more exhibitions, new objects? Will his children take over the creative direction too?

I wish Fornasetti could reach a broader audience, different from design.

Currently, under my artistic direction, Fornasetti is aiming to be less connected with commercialism. I’m trying to find new ways to employ the motifs in other fields open to a broader audience. My purpose is to make Fornasetti available without necessarily buying an object. Today, we can define something as “art” without a physical object, in the same manner as decoration can convey a message without being associated to a commercial object.

Decoration, that I do not consider part of minor arts, can be applied to various kinds of supports and fields. This is what makes it unique and essential as much as music: try to imagine a world without it, it would be very sad.

I don’t have kids of my own. My children are my collaborators. My team will perpetuate the Fornasetti spirit over time.

Thank you Mr Fornasetti and Yuki Tintori, speaking to you was a dream-come true