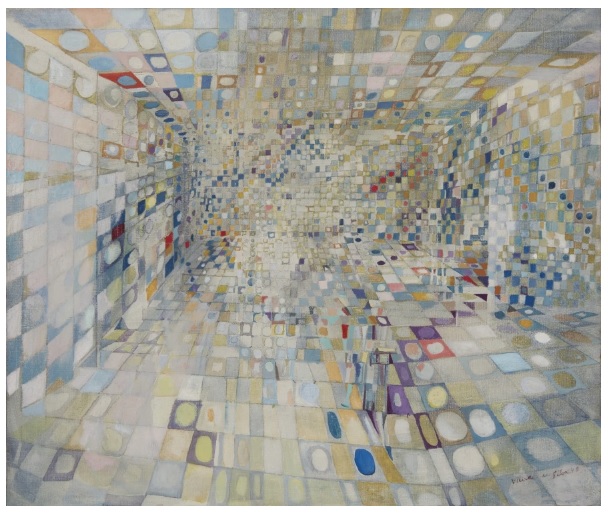 Waddington Custot in London presents Invisible Cities, a fantastic exhibition curated by Flavia Frigeri and running until 4 May 2018. Drawing inspiration from Italian writer Italo Calvino, the exhibition explores themes of the ideal city where reality and imagination can only coexist. It features masterpieces by the likes of Maria Helena Vieira da Silva, Giorgio de Chirico, Tomás Saraceno and Shusaku Arakawa and it shouldn’t be missed.

In the exhibition, the closest literal reference to a city is found in the ‘metaphysical’ cityscapes of Giorgio de Chirico (b. 1888, Volos, Greece; d. 1978, Rome, Italy). Calvino described de Chirico’s dream-like setting as a ‘city of the mind’; the mysterious perspective of an Italianate portico becomes surreal, surrounded by an empty space and green skies resonate with the architecture of the nearby Royal Academy of Arts, which historically triggered the presence of commercial galleries in the area.

Calvino’s Le città invisibili, published in 1972, imagines a fictional conversation between the Venetian explorer, Marco Polo, and Kublai Khan, the 13th century ruler of the Mongol Empire. In the paintings of Maria Helena Vieira da Silva (b. 1908, Lisbon, Portugal; d. 1992, Paris, France) the physical architecture of the cityscape is splintered. She used ‘floating’ lines to draught architectural structures to highlight an imaginary space. She noted, ‘I want to paint what is not there as though it existed.’ As Polo recalled cities from memory, so Vieira da Silva’s imagined structures and landscapes were constantly shifting, as distant recollections.