Over the past few years, British psyche-rock band Django Django from Dalston have been all the talk among music pundits, who have heralded them as the next big thing. Only problem until recently, except for a handful of hugely promising one-off tracks (Storm in 2009, Wor in 2010), there had been no actual album to chew on. That is, until last February, when Django Django released their wild and colourful self-titled debut album. They agreed to give Art is Alive an exclusive interview before their gig in Tourcoing, France, on 22nd May.

When I am taken to the backstage room to meet the guys, there’s actually only half of the band around (I ask myself if that makes it just one “Django”):  David McLean, the drummer and leader, and Tommy, the keyboardist, tell me with a grin that Vincent/Vinny, the guitarist/ vocal lead, and Jimmy, the bassist, have just gone out to buy a football but should be back shortly. David and Tommy are happy to kick off and seem very chilled-out, well accustomed to the exercise and very articulate about their eclectic artistic proposition.  This is not their first time at Roubaix’s Grand Mix, as the band played at the Northern French city’s alternative concert hall last year as Metronomy’s support band. “Our track Storm featured on a French compilation some years ago, so we got people interested, [..] We just seem to go down very well here, people seem to like our music, so if we can carry on selling out our shows we’ll come over. In France you’ve got such amazing food and amazing wine. Over in Britain you’re more likely you get served some ham and toast.” says Jimmy.

About the origins of the band, David explains that three of the Django Django boys first met at Edinburgh College of Arts and started working on bits and pieces together, but they all went their own way in life. It’s only when they had moved down to London for various reasons that they started to work together on a proper project. “We all live separately but about 15 minutes away. We’ll meet every day or every second day, it’s quite intensive. On tour it’s intensive too, but we’re good on tour – Tommy takes the brunt of the verbal stick, but he takes it well. He’s the butt of the jokes, unfortunately for him.” teases Jimmy.

Having read in the press their name had nothing to do with gypsy jazz legend Django Reinhard (nor with “Django Unchained”, Tarantino’s next movie), I then ask David if there is a special meaning attached to it, but there just isn’t. The band was simply looking for a double name that would have a good ring to it, like Liquid Liquid, the 80s US post-punk band, so they looked up words ‘django’popped out of nowhere. Now for the band, it’s a given – and I guess it’s not the most taxing name to carry along!

However unique and idiosyncratic the band might sound, with their iridescent style that mixes dashes of spaghetti western soundtracks, Beach Boy-like vocal harmonies and tribal beats, you can’t help looking for references. A lot of the press pointed out unmistakable nods to the cult Scottish ‘Beta Band’ from the 90s, so I ask Django Django if they are tired of being compared to McLean’s older brother John’s former band. David doesn’t seem to find the association uncalled-for. After all,  the brothers grew up together listening to the same collections of records and both believed there should be no boundaries between genres. And so Django Django takes the same eclectic approach to music, picking and mixing from all sources, regardless of established categories or classifications. When it comes to contemporary bands, David mentions Hot Chip and Animal Collective as the closest bands they are usually associated with – a comparison he respectfully takes on. I then ask the band if there are other art forms that particularly inspire them outside of musical influences. Tommy is almost instantly pointed at as the ‘ visual art’ guy of the bunch.  He says that like ‘normal’ people they all watch a lot of films, read magazines, go to art exhibitions and their inspiration comes from all over the place. As to their debut album artwork, it was sort of a collective effort. “Tommy did the font, based on really early Roman inscriptions, almost like Sanskrit. The shape in the middle is based on a collage Dave did. It’s basically microscopic images of Vitamin C and penicillin – in reference to drugs that do you good as opposed to those that don’t” says Vinny,  chuckling.

As we talk about visual creativity I think about the atmospheric shows Django Django have put on in the past, especially their Live BlackBox Session at the Roundhouse in London which I had seen on Youtube, and ask them if they think of live performance as the climax of their hard work. To my surprise, David replies “Well, yes and no.” But that’s only because the guys are obsessional perfectionists. To them the set is nowhere near where they’d like it to be and needs more time to mature. They hope to be in a better place by the end of the summer and then get as much out of the album as possible. When I refer to their latest appearance on “Later with Jool Hollands”, David seems obviously happy to have been on the BBC’s mythical music show, but it was far from perfect. “With live TV there’s a lot out of your control but it’s as good as it gets, I guess.”

But it’s not just the BBC. There seems to be a general consensus in the press from NME to The Guardian to say Django Django’s first album’s a winner, so I ask how that affects the way they work and think of themselves. Where Tommy claims to be a little oblivious of the critical acclaim, David is more down to earth about it: “It’s easy to be oblivious when it’s all good and you’ve made it. I think if everybody had slated us we’d be sort of pissed off. I guess we’ve always been quite stubborn, in a bit of a bubble so I don’t think much will change. It’s easy for a backlash to happen and everybody to say you’re too successful, or you’re doing too well so now we’re going to try and bring you down, but you really got to get on with what you want to do and kind of ignore the hype and the kind of pressures around you  from people. Most of the press we’ve had is people saying they’re not quite sure what is we do but it’s interesting. I think that’s the main thing so I guess people are intrigued to hear more so that kind of keeps us going on.” Which naturally prompts me to ask their reaction to Chanel’s creative director Karl Lagerfeld’s recent declaration that Django Django were one of his favourite bands.  Turns out they were kind of surprised, as you would be, and went out to buy some sunglasses for everyone to wear one night, in honour of the crazy German designer. Jimmy adds: “I don’t suppose you can really dictate who likes your music. As long as it’s not David Cameron, we’ll be fine.”

It’s a busy year for the Djangos. Hardly was the album released than they went off touring. So I ask them out of all the gigs which are the ones they particularly look forward to? For David the Scot, it’s obviously ‘T in the park’ in Kinross-shire (6-8 July). Tommy seems to have a fondness for Scandinavia. He puts Roskilde in Denmark (5-8 July) and Airways in Iceland [30 Oct- 4 Nov] at the top of the list, a country that “completely took [his] breath away.” when he was last there. Jimmy is eagerly waiting for their trip to Australia and Japan, while Vinny will be just happy to play at home: “I’m from Derry, Northern Ireland. We’re playing there next month for the first time, really looking forward to it. Everyone is going to stay at my mum and dad’s.” With a busy schedule ahead, does that leave any time to think about a second album? “It doesn’t leave us much time to do anything, it hardly leaves us enough time to practise and get this set the way we want it. We’ve only got a couple of days here and there every month to be at home, and then you end up just catching up on your washing so it’s difficult.” answers David, always very casual.

I then leave the amazingly approachable gang to chill out a bit before the gig and go back to the pit to enjoy the excellent BRNS, the fascinating mystical band from Brussels who are doing the cover that night. When David, Tommy, Vincent and Jimmy take to the stage with their hand-painted pattern tee-shirts and adjust their gear, you can guess some spectators mistake them for technicians. But as the lights fade, the crowd literally goes mad and the energy in the room seems to galvanise. From jungly samples of Introduction to the playful Skies over Cairo and Django Django’s instant hit Default (used in MIU MIU’s SS 12 Access Campaign video starring Mia Wasikowska), the band reveals the unique psychedelic mix of pop, folk, surf rock, electronica and African vibes of their new album to a bewitched audience. The pace is at times slow and hallucinatory, and then it gets all joyfully energetic. It’s plain to see everyone in the room is having a great time – and the band, led by Vincent and Jimmy’s dabbles at French, appreciate the reception from Tourcoing’s spectators.  After just over an hour of incredibly inventive tunes, the concert is over. “It was amazing, a totally brilliant crowd.  I really had a good time. I enjoyed every minute of it, it was like being in a pizza oven.” Tommy exclaims, as the (now sweaty) band comes to greet the fans shortly after the show. Let’s hope they can remain just as friendly and down to earth for as long as possible! 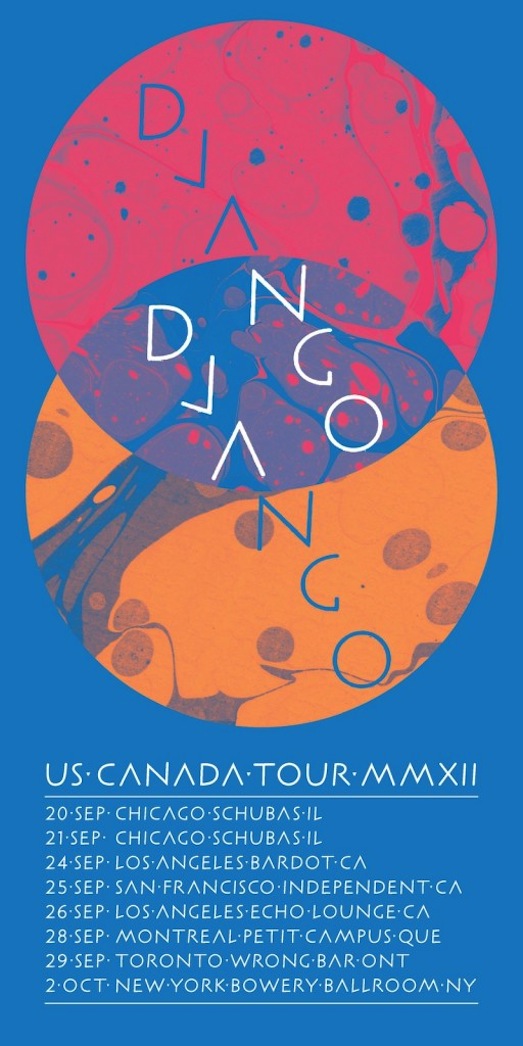 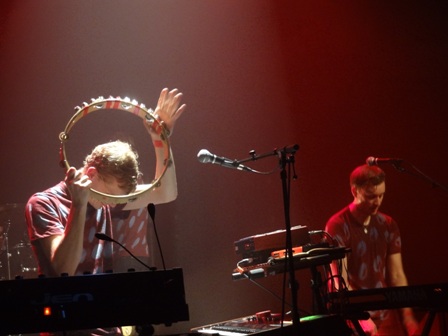 A huge thank you to Django Django for your time, it was great meeting you – all the very best for the busy and exciting summer ahead!

Thomas  – Special correspondent for Art is Alive from Lille, France.