Baptiste Brun is Lecturer in history of contemporary art at université Rennes 2, author of Jean Dubuffet et la besogne de l’Art Brut (Jean Dubuffet and the labour of Art Brut), and  Isabelle Marquette is Custodian of heritage. They both curated the stunning exhibition titled Jean Dubuffet, a barbarian in Europe presented at the Mucem in Marseilles, France. Here they explain the inspiration and significance of the exhibition.

How ought one understand the title of the exhibition? Is Jean Dubuffet a “barbarian in Europe” meant for having swept away the dominant values of the time, or does this title also evoke his relation to cultures long assumed as “primitive”?

Both! It is precisely because Dubuffet questions the values of Western culture of his time that the controversial term “barbarian” was chosen. This refers to a book by the poet Henri Michaux Un barbare en Asie (A barbarian in Asia), where he discovered that in a “barbaric” country, i.e another culture, he was the “barbarian”; it is a bid to relativise values similar to Dubuffet’s approach. The two men admired their respective works. On the other hand, Dubuffet is interested in non-Western cultures – long thought of as “primitive” – and in fact disputes the use of this qualifier. He refutes the concepts of both “primitive art” and “primitive culture”. For him, there is no hierarchy in art, there is only invention. He considers that “primitive” is a European invention to colonise the world.

In a museum like the Mucem, that questions the porous nature of cultures, it is interesting that this concept of “barbarian” that still prevails today, can be challenged in a new way. At a time when the issues of migrants and borders are hotly debated in Europe, this theme still seems highly relevant.

For Dubuffet, Art Brut concerns “works made by people unscathed by artistic culture”. It is also a poetic designation, because “art” is the opposite of “raw”. With this oxymoron, he reminds us that he is a writer, an inventor in language. Finally, as researcher Céline Delavaux explains, Art Brut is also Dubuffet’s “fantasy”: the fantasy of being able to create from one’s own impulses without referring to anything else, namely pure creativity.

Art Brut is also a search. It is a search for objects, which he calls “works”, a term that can cover writing, painting, sculpture, embroidery, assemblage – all kinds of things of great invention, that he will seek out via what he dubs “prospections”, a word close to the vocabulary of ethnography. He will set up a large network of collector-scouts in the fields of psychiatry, folk arts, and ethnography, that will enable him to bring together what will become the Collection de l’Art Brut in Lausanne.

How has this concept evolved since its “invention” by Dubuffet?

The concept of Art Brut comes about in the summer of 1945 during a trip to Switzerland where Dubuffet visits the musée d’Ethnographie de Genève, as well as psychiatric hospitals. He is interested in everything that demonstrates artistic otherness. Where is a different art found? In Africa, in Oceania, in colonised countries, with children, in psychiatric circles, in prisons, in folk art, and in street graffiti! Today, the term Art Brut is used too often to refer to everything related to creativity that is connected with pathology and mental deficiency, whereas Dubuffet had always wanted to avoid this. For him, there is no art specific to schizophrenia or Down’s Syndrome. This is a contemporary simplification of the term; this is also about the market: madness has an added value! Dubuffet wanted to celebrate the uniqueness of invention. But the commercialisation of Art Brut insists less on invention than on psychological and mental otherness, while also referring to a certain contemporary morbidity.

We could have called the exhibition “Dubuffet, ethnographer”, but did not want there to be any confusion. Dubuffet is  an artist above all. He is neither an ethnographer, nor a historian, and much less an art critic. But like many artists of his generation, he is interested in literature, ethnography, philosophy, psychology, sociology, prehistory… All these disciplines compete, during the interwar period and beyond, to redefine the limits of art. Dubuffet likes “quarrelling” in the philosophical sense of the term; he likes to debate contemporary themes at the junction of art and the Humanities. And furthermore, he will go on to to divert some practices of the fields of ethnography and psychology to his ‘prospections’ for Art Brut, as well as for his own work. In this sense, he is a precursor to what American writers like Hal Foster called “the ethnographic turn of art”.

What surprised you most during your research phase for this exhibition?

His manic passion. Dubuffet was very systematic in his research and work, he archived absolutely everything, and created a vast oeuvre: he was one of the most prolific artists of his time. And an equally prolific writer. This mass of available archives allowed us to see a genuine coherence between his activities as a writer, his activities as an artist, and his research around Art Brut.

Dubuffet has often been criticised for being immersed in contradiction, but what we forget is that, in his case, contradiction is a driving force, a movement that invites us to go beyond fixed positions. Hence this movement around the questioning of dominant values.

What are the major works presented in the exhibition?

It is difficult to answer because Dubuffet refused to establish a strict hierarchy in his work. We can nevertheless cite some important works such as Le Géologue (The Geologist), who shows a small figure on a landscape of stratigraphic layers, holding a small magnifying glass. It is a way to show that man is no longer at the centre of the world. We can also mention the work Le Métafizyx, which was lent to us by the Centre Pompidou / Musée national d’art moderne: a woman’s body where the artist shows the inversion of values and genres, while twisting language. A sort of reversal of fairly iconoclastic polarities.

After the Mucem, this exhibition will be presented in Valencia, then in Geneva. Proof that Dubuffet’s ideas are still relevant?

On the one hand, it is interesting to note that many young artists are now interested in the work of Dubuffet even though this was much less the case in the 1980s and 1990s. On the other hand, one can see in the exhibition catalogue which involved art historians, anthropologists, and philosophers, that the link between the arts and the Humanities is at the heart of the most recent research. This exhibition at the Mucem is a way for us to evoke Dubuffet’s relationship with the musée de l’Homme and the musée des Arts et Traditions populaires. As for the exhibition at the musée d’Ethnographie de Genève, it marks a form of celebration of the decisive journey of Dubuffet to Switzerland, which we referred to above. It was 1945, almost 75 years ago.

The exhibition will be presented successively in a museum of civilisations, a museum of modern art, and a museum of ethnography. This summarises well Dubuffet’s trans-disciplinary character. This openness was a driver for him to reflect on the world – not that he didn’t risk doubting the validity of all values, oh the joyful nihilist that he was! This is also what is presented at the end of the exhibition. 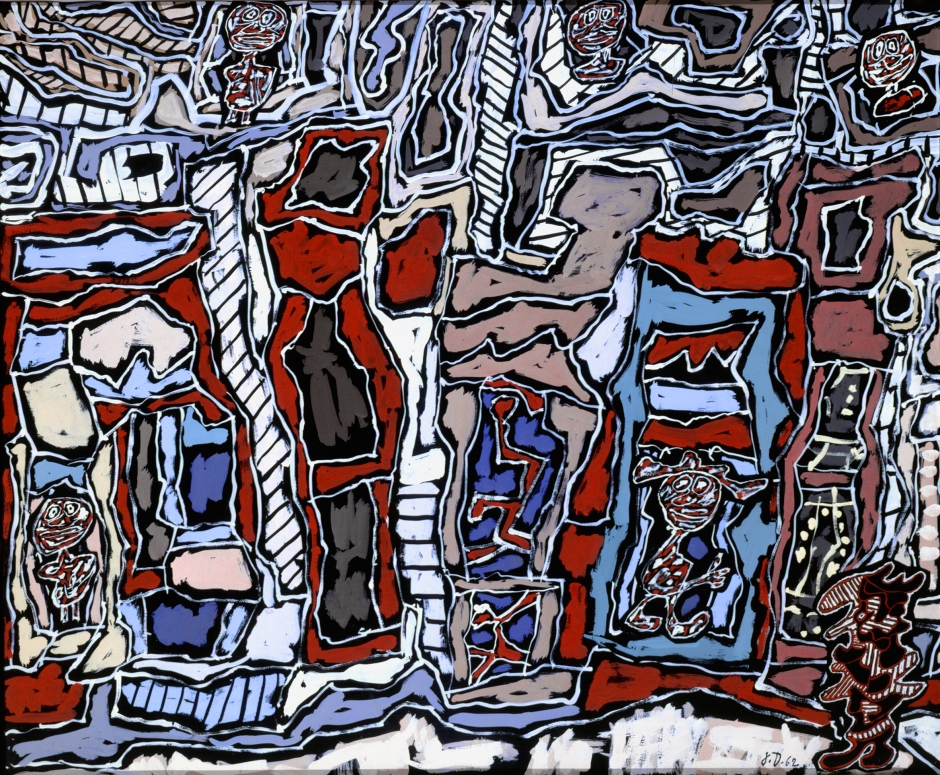