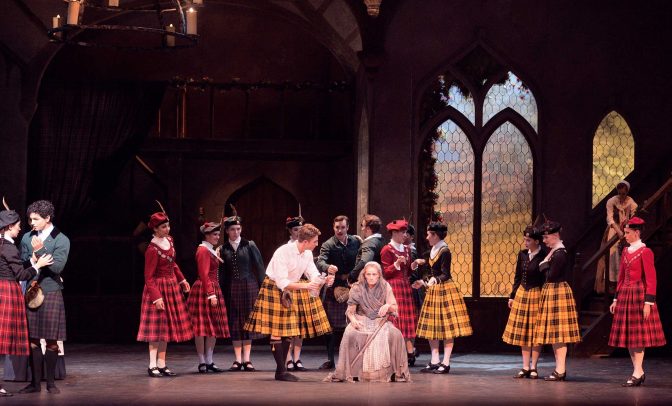 The English National Ballet celebrates MacMillan’s music and poetry by revisiting the Scottish choreographer’s repertoire with a beautiful performance of Song of the Earth. The show coincides with the 25th anniversary of MacMillan’s death and the interpretation is an enormous success. The cast led by the company’s inspiring artistic director Tamara Rojo, is precise, very talented and poignant. The dancers successfully convey the emotions of the characters, oscillating between love, threat, fragility and loss. The three main figures: the Man, the Woman and the Death Messenger are very precise in their simple monochromatic outfits, and the stage and atmosphere on stage very dark culminating with an almost-expected dramatic ending. The expressiveness is striking and the movements perfect. The impressive quality of the show also comes from the live performances by a tenor and contralto on stage, alongside the sublime score performed by English National Ballet Philharmonic.

Song of the Earth is followed the same evening with a vibrant performance of Bournonville’s 19th-century romantic-dramatic ballet La Sylphide, in two acts. Scottish farmhouse, James Ruben is soon to be married with innocent bride-to-be Effie who arrives with her mother and entourage in the gigantic house where James woke up to the meet the Sylph he never managed to catch the previous night. Erina Takahashi plays the enchanting Sylph who magically and graciously disappears on the first night she meets James through the chimney, here by bringing a grin on the viewers’ faces. The show offers impressive and positively overwhelming Scottish-folk dance footwork while at the same time features Scottish traits: the landscapes, the tartan, and the bagpipe are all there. The stage set is amazing, the choreography impeccable and the special effects very convincing. A narrative that starts with humour, slowly moves towards schizophrenia and sadness and the dancers reach to this level of emotions through flawless dance. The performance is positively exhilarating, and the costumes and stage set fantastic.