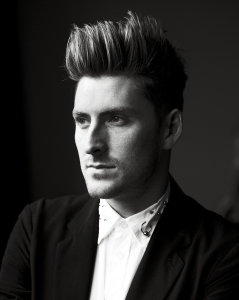 Fashion designer, former journalist, businessman, creative talent and National Treasure Henry Holland talks to Art is Alive about his beginnings, authenticity, his mentors, and how to succeed in the fashion industry.

Where do you take your inspiration?

That’s a very difficult question to answer. I think as a creative person you’re sort of like a sponge. You’re constantly absorbing different ideas and concepts and trying to reconfigure them in your head to a way you can translate them through your work – that comes from all different places. I really like to reference films and fictional characters because I love the characterization of fashion. I love the way that you can use clothes to really tell the story of a character almost as much as dialogue.

Who have been the mentors and biggest influence on your career?

My parents have been a massive influence on my career. My parents work in very different industries – my Dad is very traditional and runs his own law firm while my Mum runs a château and a training company in positive thought. My Mum runs training courses on meditation and relaxation, she’s very spiritual like that. My parents are at two completely opposite ends of the spectrum, but they both have the exact same approach in that whatever it is I told them I wanted to be, you couldn’t ask anyone to be more supportive as long as I had the conviction and the drive to do it. They would have been happy if I’d have been a bin man as long as I’d worked my way up to driving the truck. That was their approach. It was like just be you and be good at it.

What would be your advice to anyone starting out wanting to make a career in fashion?

It would be to find that authenticity and what it is you want to say with your work. There’s so many brands out there and there’s so many different things going on in the fashion industry, it’s hard to cut through the noise. It was much easier for me ten years ago. I think its really about ensuring you’ve got something to say that is unique and different. The way you communicate that is so important. Just stay very true and authentic to yourself because its so much extra work if you’re having to be something you’re not. That’s a job in itself.

What skills do you think are most important to be a success in fashion?

You need to be tenacious, have drive to succeed, passion in your work, commit to what you want, a fearlessness to stick with it, and creativity to deliver.

What made you decide to create your own brand? It all started with your iconic collection of slogan t-shirts…

I was working in magazines and I absolutely loved it. I actually had no intention of creating anything that would change my career path. I just started making t-shirts for my friends and I to wear as a personal project. I think the authenticity and grassroots nature of the work really resonated with people and the industry – it took off quite quickly! It was very much an idea I had for my friends and I which worked on a wider scale, but that was never my intention and I think that’s why it worked. I think if I had a preconceived marketing strategy to launch the shirts in the way that I launched them, it would have been interpreted as unauthentic and wouldn’t have resonated in the same way. It all happened for a reason.

What was the best piece of advice you were given when you started out in your career?

I think the best advice I had was to remain very authentic and true to who I am. I’m staying really strong on that with what I want to do and say with my work. I think people really forgot the fashion industry is an objective industry. One person’s favourite dress can be another person’s most hideous piece of clothing that’s ever been put out there. You have to remember that not everyone’s going to like everything that you do. So if you build your brand, build your company on a very strong set of rules and a strong DNA, then however much people like or dislike what you do then you can always remain true and authentic to what it is you set out to say in the first place.

Credit: “Henry Holland was speaking on behalf of online job boards totaljobs and Milkround in their latest campaign around achieving a healthier work-life balance”