On the eve of the most anticipated V&A retrospective dedicated to the man himself, this morning, David Bowie released a new single titled “Where are we now?”
David Bowie is undoubtedly the “kind of artist who writes and performs what he wants when he wants…” as the press release states. He’s also a master of communication and proves his genius again. After ten years of rare public appearances  and barely no PR, he announced today an upcoming album, presented a new website and a video for the new single. How amazing ! It comes as a big surprise and makes me really happy.
The song, which is haunted by the spectre of depression or even death, focuses on Bowie’s creative years in Berlin. The video, filmed by contemporary artist Tony Oursler, who has worked with Bowie in the past (remember the stage of his 50th anniversary celebration for instance?), is set in the visual artist’s studio (and not in the shop beneath the apartment Bowie lived in whilst in Berlin in the 70’s).

Reflecting on the design of the cover of the upcoming album and “Bowie’s Berlin trilogy”, Jonathan Barnbrook, graphic designer said: “The “Heroes” cover [used for this new cover] obscured by the white square is about the spirit of great pop or rock music which is ‘of the moment’, forgetting or obliterating the past.” The second surprise, I’d say after the announcement of this new material definitely comes from this cover.

Taking deliberate inspiration from his own past to create something new, is in itself an innovation. Is Bowie telling us?: “please forget what I did in the past and focus on something new, but don’t forget it at the same time…”. The only reference to his past I could remember is in Ashes to Ashes where “Major Tom had become a junkie”…

I am under the impression that he must have also been bored and fed up with today’s “music icons” who keep on stealing from his visual identity and past innovations. These people who are more interested in becoming famous than producing good music. Isn’t it what is expressed through the simplicity of this video? An anti-marketed and superficial artist appears in “Where are we now?”… He doesn’t need to wear a stupid outfit Lady Gaga, he did that 40 years ago, so don’t pretend you invented it all. Well done David. I am glad you’re back with a big splash. Oh and happy birthday ! 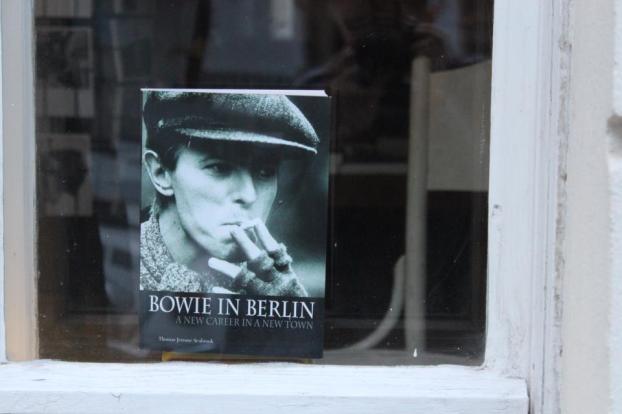