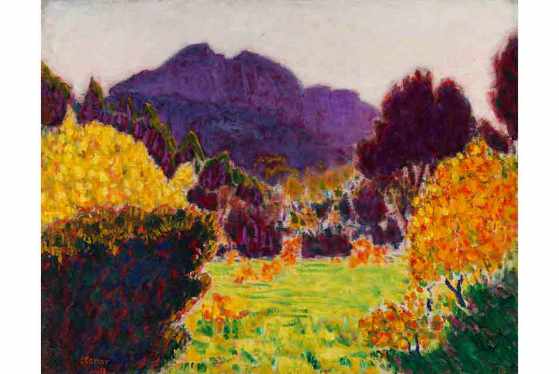 The National Gallery of Ireland features a major exhibition of works by Irish artist Roderic O’Conor (1860- 1940), until 28 October 2018. This is the first exhibition in over 30 years to explore O’Conor’s works across all media. The remarkable exhibition highlights the affinities with other  artists of the Pont-Aven school including Gauguin.

During Gauguin’s last season in Brittany, he and O’Conor became friends. In May 1894, the pair were involved in a brawl with sailors in Concarneau, in which Gauguin broke his ankle. When Gauguin recovered, O’Conor allowed him to use a studio at the manor of Lezaven, and Gauguin based part of a picture on one of O’Conor’s drawings.

The strength of his artistic connections is demonstrated for the first time by placing his work in context, alongside that of Van Gogh, Gauguin, Bernard, Denis, Sérusier, and Seguin.

Roderic O’Conor & the Moderns: Between Paris and Pont-Aven brings together some of the most significant paintings, drawings and etchings from his critical years in Paris and Brittany (1886- 1904), when he was a leading member of the Pont-Aven school of artists, and places him at the heart of the late 19th-century avant garde.

The exhibition curators have selected some of his very best works from the 1890s – many not previously seen in public – drawn from public and private collections including Tate, the Museum of Modern Art, New York, and the Norton Simon Museum, Pasadena.